Please note these pages are under development 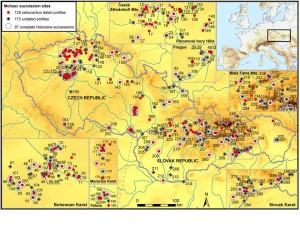 Data are available on request, upon submission of a request for data access proposal, from Jitka Horáčková (jitka.horackova@gmail.com) or Lucie Juřičková (lucie.jurickova@seznam.cz).

Data request: Raising funds to continue work on samples collected by Dr. Ložek between the years 1948-2013 is easier if usefulness can be demonstrated. For this reason, we ask that users submit the data request form, which creates a record in our user database. The prospective investigator should resubmit the form for each substantially different project.

Non-transferability: So that we can vouch for the accuracy of the data, and so we get a record of every use, we ask that the prospective investigator not share the the Czech Quaternary mollusc data with other parties not included on the Request for Data Access Proposal.

Citation: Publications using the Czech Quaternary mollusc data should include the following citations:

Copies of articles: Copies of articles should be sent to Jitka Horáčková (jitka.horackova@gmail.com) or Lucie Juřičková (lucie.jurickova@seznam.cz) prior to submission. Unless stated otherwise, LJ or JH will not be involved as collaborators, but reserve the right to request authorship. If you did not hear from us within two weeks, LJ and JH would relax upon the collaboration. Once published, any manuscript making use of the Czech Quaternary data should be sent to the LJ.