Center for Theoretical Study, Charles University in Prague and the Czech Academy of Science (CTS) is the only institution in the country that is comprised of scientists from different disciplines, in an attempt to promote transdisciplinary interactions.

CTS conducts several projects ranging from sociology and ecology to mathematics and physics. In particular, the members of our research group are/were involved in (i) FP7: SCALES – Securing the Conservation of biodiversity across Administrative Levels and spatial, temporal and Ecological Scales 2009 – 2014, no. 226852; MŠMT 7E09119; (ii) Macroecology beyond species richness: reconciling ecological and evolutionary processes driving spatial variation of biodiversity 2011-2014, GAČR P505/11/2387; and (iii) Prior to the Neolithic: Contextual Analysis of Environmental Dynamics During Early Postglacial Transformation of Central Europe 2013 – 2017, GA ČR 13-08169S. 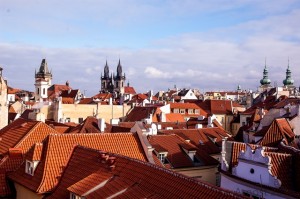 A view from the tower of the Center for Theoretical Studies. 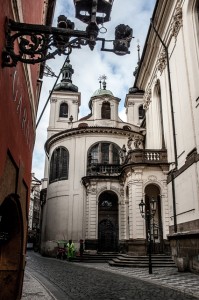 For example, this elliptic-shaped chapel is told to inspire Johanes Kepler’s discovery that the planets revolve around the Sun along the elliptic trajectories. The truth is that Keppler used to live just across the street. From another vein, Albert Einstein formulated his theory of relativity playing a violin and watching the garden of the Prague lunatic asylum. The truth is that Einstain could have watched the garden in days when formulated the theory. We hope to make similar discoveries by staying in Prague.

Charles University in Prague (CUNI or simply CU) was founded in 1348, making it one of the oldest universities in the world. It is the largest and most renowned Czech university, and is also the best-rated Czech university according to international rankings. At present the CUNI has 17 faculties at the University (14 in Prague, two in Hradec Kralove, and one in Plzen), three institutes, and six centers. The key priority of the Charles University is to continue to enhance its prestigious status as a research university. To achieve this aim, the University focuses strongly on research activities.

The Lillehammer University College north of Lillehammer at the gate of the Gudbrandsdalen valley. Founded in 1971 under the name of Hedmark-Oppland College, the first year it only had 34 students. Today Lillehammer University College has about 4,000 students. All activities are located at the Storhove campus, with magnificent (more than 30,000 m2) built as the radio- and television centre for the Lillehammer Winter Olympics in 1994. Today, the Lillehammer University College has four main departments, whereof one is the “Norwegian Film School”. The university college stands out as one of the best achieving in research, with the best publication record per academic staff (faculty member; as measured by the Norwegian score system) of all the ordinary university collages in Norway (over the last 10 years, since the score system was introduced). In the course of the last ten years, ten new master programmes and two PhD programmes have started up.

The University of Bergen (UiB) is an internationally recognised research university. Academic diversity and high quality are fundamental for us. UiB is the most cited university in Norway.

There are six faculties at UiB and there are a total of 14,000 students at the university. Around 1,550 of these are international students. We employ 3,500 staff. PhD candidates are paid employees of staff, making the doctoral degree at UiB particularly attractive for rising talent. About one in three graduating doctors are from outside Norway.