Biodiversity protection and habitat conservation on a global scale have received much attention over the past few decades. These issues have already found their place in national legislation and in worldwide NGO activities. No consensus has yet been reached concerning the impact of agriculture and climate on the mechanisms that stabilize ecosystems over long periods. This can be attributed to the fact that the majority of ecological studies refer to the systems that are studied over shorter periods. We intend to overcome this limitation by analyzing the long-term succession of the ecosystem parameters and human activities. For this purpose we will utilize archeological databases, and subfossil data across gradients of settlement history.

This issue is more than a purely theoretical one. Our findings will elucidate the extent to which human activities have changed ecology, and this knowledge will be of use to nature conservation and biodiversity protection.

Scientists from three top institutions in the field, the Charles University, the Lillehammer University College, and the University of Bergen have together created a time machine in terms of computational methods and data enabling them to explore human coexistence with nature in very long term perspective. They uncovered the rapid homogenesation of plant communities in space after 5,800 before present, i.e., after arable agriculture was introduced into Central Europe. Interestingly enough, this homogenization was accompanied by a gradual increase of diversity and constant specialization of species to species-poor and species-rich sites. No effect of this kind was seen in Norway in the same time period, where the impact of human settlements was undetectable, if any. We obtained exactly the same result from the study of variation in the speed of assemblage recovery after disturbances during the Holocene. Simultaneously with spatial homogenezation of plant communities in Central Europe, we have identified rapid changes in ecological rules that until now have been considered stable across space and time, and that are employed for predictions of climate impact on biodiversity. It therefore seems that people took control over natural rules and these rules can hardly been used for projections of biodiversity response to a changing environment. Unlike Norway, Central Europe became kind of a permanent “tended garden“. Indeed, a control study showed that the recently used method of climatic envelops fails to predict historical changes of vegetation maps. These results raise the question of the different role of different habitats for the preservation and stability of ecological rules. The analyses of recent data, which were collected with support of Norway Grants and MŠMT in Central Europe, Norway and Siberia, suggest that riparian habitats may play a stabilizing role.

The data collected during the research and successful collaboration between Czech and Norwegian Universities promises several other surprising discoveries in the near future. Our results will have been disseminated via articles in ecological and popular journals. 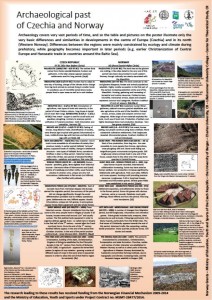 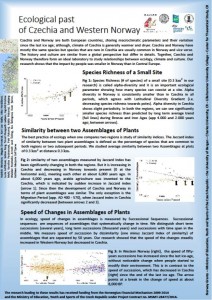 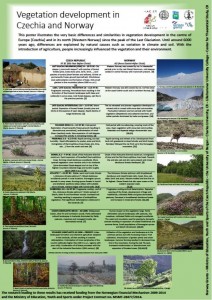